In my previous procrastination post I introduced my custom male followers I created for my own amusement for the fabulous game of Skyrim. They were sandboxing in High Hrothgar and had their own small story. All I wanted to add was a simple quest to get them as followers. After studying tutorials I still don’t quite follow the whole quest creation procedure, but I will get there eventually. I’m persistent. It takes me longer to master stuff, but when I do, I’m thoroughly anal with it. And since there is a lot to learn here — especially when it will come to scripting, I’m set up for some portion of my procrastinator’s life.

The reason I got into modding at all was that I needed a new hobby. I got bored with everything I do outside writing (and maybe even with writing itself as it was!) and now I can feel the spark I thought I had lost a long time ago. It is quite reinvigorating for me.

So, all this aside, I sat down and wrote my first quest. I still don’t know how to implement it, but now I will need to rewrite it, since my in-game conditions changed.

While the characters were placed in high Hrothgar, this was what I had in store for them. It’s nothing special and I tried to be lore-friendly. But it still came out quite silly. 😀

I’ve noticed two young Nord men in High Hrothgar who seem to be studying with the Greybeards. They appear quiet and reclusive, like the rest of the monks. I want to learn more about these two.

>> Objective 5: Talk to any of the Silver-Eye brothers

DRENNAN BRANCH
Player: Hi there. Who are you?
Drennan: I’m Drennan. And the skinny guy over there is my little brother Verod. So, Master Arngeir thinks you are Dragonborn?
Player: Yes, it seems so.
Drennan: Amazing! I bet you had your fair share of adventures with that destiny already. I wouldn’t mind having a dose of those, but Master Arngeir will probably be against any warmongering on my part… (Sigh) and my brother and I have errands to run. Perhaps some other time, friend.

VEROD BRANCH
Player: Hello. Who are you?
Verod: I’m Verod, and there’s my elder brother Drennan. Are you really Dragonborn?
Player: Yes, it seems so.
Verod: Interesting! I wouldn’t mind sharing the fun of battle and treasure hunting, but Master Arngeir has some tasks for me and my brother to complete. Perhaps some other time, eh?

Player: I though there were only five of you. (This dialogue appears after the player asked Arngeir how many of them were in High Hrothgar and if the player had talked to any of the two potential followers, the event which starts the quest APPRENTICE TONGUES).

Arngeir: Yes, as I’ve said it before. The other two young men you’ve seen here are our apprentice Tongues.

Arngeir: (Sighs) Foolhardy sometimes. Talented as they are, the Silver-Eye brothers have been mastering to use the Voice since very young age and hopefully one day will become Greybeards themselves. Not yet, though. They have much to learn.

Player: I think I’m starting to understand why you’re being too cautious with me.

Arngeir: True. Perhaps, a bit overcautious. Mistakes with entrusting this kind of power can have dire consequences. Both brothers are capable warriors and good men, and they have thirst for knowledge and peace in their hearts, yet they are still full of adventurous fire and curiosity. As they are now, the Throat of the World is a little bit confining for the two. You should speak to them, Dragonborn. Knowing both, I have no doubt they would agree to aid you on your journeys.

Player: It seems Arngeir doesn’t mind if you two go out into the world. Are you still interested to join my travels?

Drennan: Really? Maybe because it’s you, Dragonborn. Sure, why not. However, I don’t want to leave the little one behind. Verod won’t show it, but me going without him will make the guy sad. We’ve been together since forever, though we have different mothers.

Player: Ah, that’s how it is. One can’t tell you are related just by looking at you two.

Drennan: We may not look alike, but our bloodline has been around for a long time. We trace our ancestry to one of the early Dovah-Sonaak… a dragon priest of Atmora of old. We are not of Dragonblood like you, but we still proudly carry the power of our Nordic forefathers, bestowed upon mortal men by Kyne herself. The dragon cult is long gone, but here we are.

Player: Descendants of a dragon priest, eh. I’m intrigued. Maybe it is truly our fateful meeting. So, are you versed in dragon language?

Player: I’ve encountered a few word walls. They made me curious and I was looking for someone who could help me translate the writings. Or at least teach me the basics. Between the draugr-punching, or something.

Drennan: Ah, yes. The walls that harbor words of power. They are all over Skyrim’s hidden, dangerous places. A bridge between the realm of the ancient Nords, and our own. Dragonborn, I would be honored to help you with your linguistic pursuits. But you should speak to my brother. He is also able to help you… with language… in some dark tomb.

Verod: I heard your conversation and I won’t mind if you two leave me here. Drennan is a beast in battle. However, if you have room for one more sword-or-spell-arm for your adventures, or you prefer a battlemage, Dragonborn, I’ll gladly jump into my traveling gear.

Player: Sure, I’d love to have you both. (Player has multiple follower mod installed and likes both characters.)
Player: Sorry, I don’t like crowds. I need someone for close combat. So I would have to ask your brother Drennan to come along instead.
Player: Sorry, I don’t like crowds. But I’d like you to come with me. I need a good Mage in combat.
Player: Not now. I’ve decided I’ll go solo for a little longer.

Drennan: I see you made up your mind. Very well then. For the future reference, if you change your mind, you know where to look for any of us.

Player: Yeah. It’s time we get going.
Player: Yeah, thanks, I got to go now.

QUEST LOG: After I learned more about the two Greybeards-in-training and they got acquainted with me better, the brothers agreed to provide support on my future adventures, whenever that might be.

However, after a few fresh playthroughs I got annoyed with how long I had to play before I could get them to follow me. I needed to travel to High Hrothgar and complete my training as Dragonborn before I could even talk to them. The pleasure of custom followers is that you can get them ASAP.

Fighting them is not advised, since they are essential and have massive amounts of life. Unless you cheat in game, you’ll end up dead. At the beginning of the game you are a nobody and they are level 150 + bonuses.

The story behind their house idea was pretty simple: their father died and they had to return home from High Hrothgar to bury him. And eventually they remained in Whiterun until they met Dragonborn. Why didn’t they help the fine folk of Whiterun when the dragon attacked? They can’t kill a dragon permanently — they are no Dragonborn — and they don’t want to show their power and magic, otherwise they will have trouble with the locals. Nords don’t like magic people and those two are damn hot magical Nords.

So, the house. I took me 3 attempts to finish what I had started.

The first attempt ended badly since I placed the house in Whiterun (between Olava’s and Ysolda’s houses, there is a rock patch). Placed is not a good word. Squeezed into the place is better. And eventually I fucked up the Whiterun cell navmesh. So I had to scrap that one.

The second house I made was good. I made a beautiful inner cell. Only to realize that I edited a vanilla cell I had copied from BY MISTAKE. So I had to return to the basics of this mod and build everything from scratch again…

But then I finally succeeded.

All was left to do is to fix the damn navmesh in the outer cell. Now, I’m not really good with this thing yet. But I was lucky I didn’t place my house on the cell intersection and I had an object I removed earlier from the map — a log — that left me with the edges of the navmesh to work with. LUCKY!

It took me several attempts to make the navmesh comply with what I wanted it to look like. When I was done, my NPCs could leave and enter the house and walk around as they normally would. THE JOY! 😀 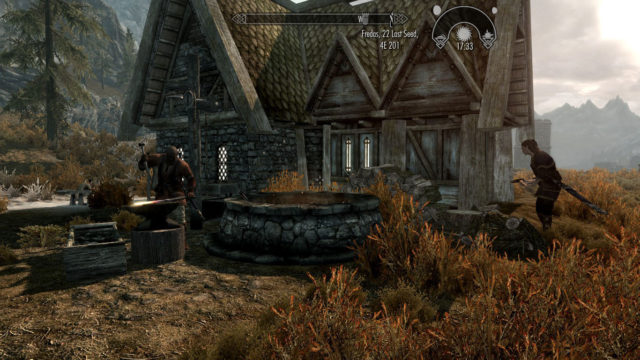 So all was left to do was to give them basic AI packages so they would interact with their house and even go for a drink to Bannered Mare in the evening.

The house is near Whiterun — close to the intersection where the Dragonborn first hears the call of the Greybeards after he kills his first dragon at the watchtower. It’s a good place. Whiterun is overcrowded anyway, with Dragonborn buying the last available house. 😀 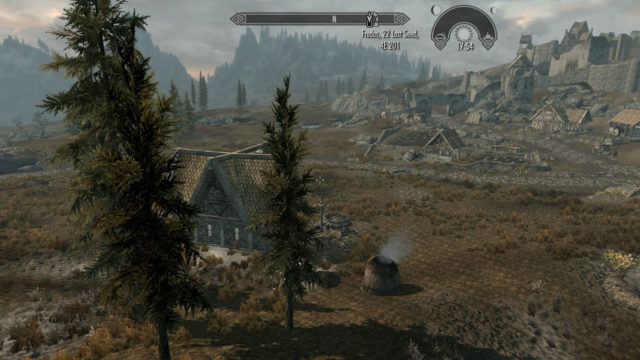 The interior is pretty simple. A couple of common beds, a wardrobe, a couple of book cases, an arcane enchanter and an alchemy lab, some rare and valuable books, a table to eat and few chairs to sit, and a cooking area. Good enough for the two tough Nords. 😀

Now that I’m done here, I’ll focus on the quest (or possibly a quest line). Writing a good one takes time. However, I have no voice actors for the job, so the mod will use Fuz Ro D’oh, which in turn requires SKSE (installed via Steam). Optional requirements: Amazing Follower Tweaks (supports up to 5 followers) with Followers Wander.

After some musing I placed Dibella’s shrine in the house and dropped Amulets of Dibella into character inventories. They are not particularly religious, but they are taking part in Skyrim’s sex cult. 😀

After some tweaking of AI packages, they are now following a schedule: