I’m returning to the topic of habitable zones around stars, since I came across some interesting stuff. I admit I haven’t been keeping a good eye on new things lately being busy with my books.

Another, Closer Look at Chemistry and Habzone

Trace elements (metals, as they are called) in stars may influence the evolution of habitable zones and all potential life on planets there. I discussed the importance of elements for planet-bulding before, but this time it’s all about stars themselves. Metals are inherited from the remains of older stars or created via nuclear fusion and it turns out variations in the compositions of these stars could impact the habitable zones. And not only by affecting the means of stellar Main-sequence lifespan, as I already had mentioned.

Metals in a star affect how opaque its plasma is. A higher opacity traps the energy of fusion more efficiently and results in a larger radius, cooler star. More efficient use of energy allows nuclear burning to proceed more slowly, resulting in a longer lifetime of the star.

Computer models were generated to explore how variations in levels of eight elements — carbon, oxygen, sodium, aluminum, magnesium, silicon, calcium and titanium — might affect the behavior of F, G and K stars. The research showed that higher levels of calcium, sodium, magnesium, aluminum and silicon resulted in cooler, redder stars.

Oxygen turned out to be one interesting element again, as the lifetime of the stellar habzone depends on it heavily. If we take two one-solar-mass stars with an earth-sized orbit around them, the habitable lifetime for the one around oxygen-depleted star is only 3.5 billion years compared to 8.5 billion years for oxygen-rich star. The presence of oxygen also is linked with cell-damaging UV radiation. A solar-mass star that is solar-like in iron abundance but relatively scarce in oxygen could produce twice as much of the cell-damaging radiation that causes skin cancer and is sometimes used for sterilization.

Of course, as I said before, the composition of a star can also influence the composition of its planets. A diverse range of extrasolar terrestrial planet bulk compositions are likely to exist, but a great majority of them may have a totally different internal and atmospheric structure (Jade C. Carter-Bond et al. 2012.) Oxygen plays a critical role in many fundamental planetary system processes, so two important considerations are the carbon-oxygen and magnesium-silicon ratios of stars. Clay minerals look like a good surface to create key components of life (e.g. the lipid membranes of cells), and those stellar ratios can affect whether a planet has certain magnesium- or silicon-loaded clay minerals such as magnesium silicate (MgSiO3), silicon dioxide (SiO2), magnesium orthosilicate (Mg2SiO4), and magnesium oxide (MgO). Some clays are better for the job than others, and the magnesium-silicon ratio in part determines the type of clay formed.

Variations in stellar composition could also give rise to planets that have different dominating elemental combinations, such as a planet with mostly carbon-based rock instead of silicon-based planet such as Earth. Plate tectonics and volcanism are expected to be very different on a planet with graphite- and silicon carbide-dominated crust.

Stars with high carbon to oxygen ratios are rarer than thought. Hence, carbon planets should also be less common. A new estimate gives a ratio to silicate planets of just ~ 1/1000.

This model was developed by the Penn State Department of Geosciences team. An updated 1-D radiative-convective, cloud-free climate model was used to obtain new estimates for HZ widths around F, G, K and M stars. (I believe it is the same, or very similar model I had tested before, continued here.) New, H2O and CO2 absorption coefficients, derived from the updated HITRAN 2008 and HITEMP 2010 databases were used. The databases have more accurate information on water and carbon dioxide than previously was available and allowed to build new estimates from the model Kasting created 20 years ago for other stars (I wrote about Kasting’s model before, and was using it for quite a while myself.) According to the new model, the water loss (inner HZ) and maximum greenhouse (outer HZ) limits for our Solar System are at 0.99 AU and 1.70 AU, respectively.

The model indicates that, near the inner edge of the HZ, there is no clear distinction between runaway greenhouse and water loss limits for stars with effective temperature ~< 5000 K which has implications for ongoing planet searches around K and M stars. Earth in this new model appears to be situated at the very edge of the habitable zone -- a conservative estimate for the width of the HZ from this model in our Solar system is 0.95-1.67 AU; the model, however, doesn’t take into account feedback from clouds, which reflect radiation away from the Earth and stabilize the climate, thus, the actual HZ boundaries may extend further in both directions than the estimates just given. [caption id="attachment_1378" align="aligncenter" width="300"] 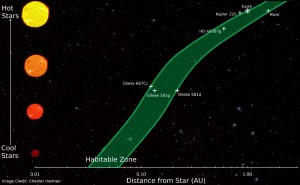 The graphic shows habitable zone distances around various types of stars. Some of the known extrasolar planets that are considered to be in the habitable zone of their stars are also shown. On this scale, Earth-Sun distance is 1 AU. CREDIT: Chester Herman[/caption]

The running model is now available for estimates of Habitable Zones around Main-sequence stars with effective temperatures in the range of 2600 K – 7200 K. You can run the model online, but the source code is also available on the same page. Calculator and model also available here.

The ‘Habitable Edge’ of Exomoons

Because the moons of alien planets orbit a larger body, they have many hurdles to habitability, such as eclipses and tidal heating, that are different from the planets they orbit. These constraints to exomoon livability include eclipses by their host planet, reflected sunlight and heat emissions, as well as gravitationally-induced tidal heating by a host planet that can dramatically impact a moon’s climate and geology.

The habitable edge is defined as the innermost circumplanetary orbit in which an exomoon will not undergo a runaway greenhouse effect. To be habitable, the orbit of the moons must lie outside of the habitable edge.

The “planetshine” can also add a substantial amount of energy to an exomoon’s overall intake, while eclipses can potentially offset some of the extra energy input from planetshine. And because most moons are tidally locked to their planet, eclipses, as well as planetshine, would only darken and lighten one hemisphere.

There are more factors at play, like tidal heating, if the planet with its satellites is close to the parent star.

Researchers develop model for identifying habitable zones around stars
‘Habitable Zone’ for Alien Planets, and Possibly Life, Redefined
Billions of Earth-like Planets will have Chemical Makeups that Create Strange Worlds
Should We Expect Other Earth-like Planets At All?
‘Earth-like’ Planets May Be Nothing Like Earth